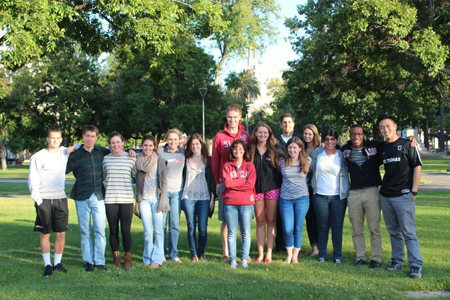 In September 2013 I started a St. Vincent de Paul Young Adult group in Santa Clara University. I did this because of a few reasons. I’d come to America to pursue a degree in Pastoral Ministries (major in Spirituality), and I reached out to different organizations to do some volunteering, similar to ‘Vinnies’ in Australia, but, there were literally no people my age volunteering, even young adult Catholics. This puzzled me as Australia has a booming population of young adult Vincentians. However, it seemed that the focus for giving (well, at least in the Silicon Valley area) was on mission trips to Peru or Mexico, rather than looking at the poverty that needs assistance right at our doorstep. St. Vincent de Paul, being an international lay Catholic non-profit organization have a group in Santa Clara. I went and visited this group and they were excited that I ‘a young person’ was willing to volunteer, and they were even more excited to hear about the amount of volunteering done in Australia. They asked if I would be willing to start a St. Vincent de Paul group at Santa Clara University, low and behold, I did, and it worked. 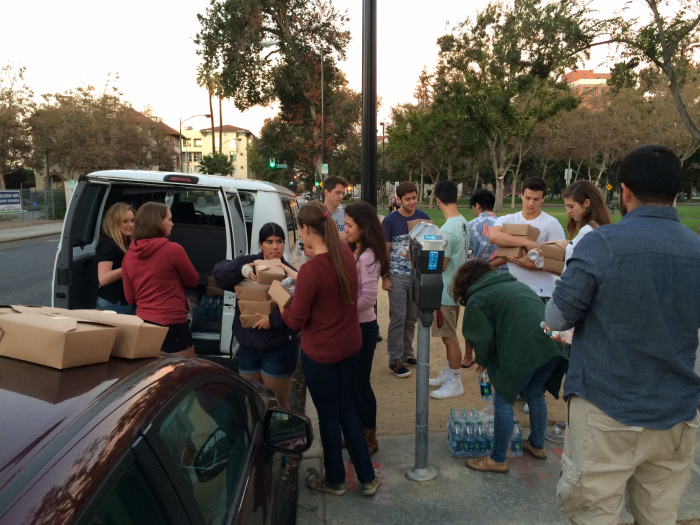 As a group we had heard about the people suffering from homelessness that lived in St. James Park, San Jose. We decided that together, once a month, on a Friday evening we would go and provide boxed lunches and a friendly face. We wanted to emulate Jesus, enact how Jesus would have responded to those in the margins. We wanted to build a community focused on lifting up those who are despair. We built so much more.
Each month that we go to St. James Park, we are acknowledged and so are the people we serve. We know their names, and their stories. I have people that call me the ‘Aussie girl’. I have three people (John, Gita and Pebbles) that I look out for as they have shared their story and it is a sad one, and something that could happen to you or I at the drop of a hat. 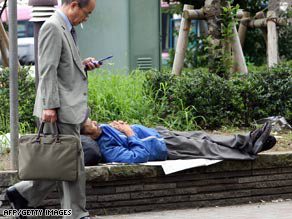 A true gift that the students and the people we serve have experienced is acknowledging their full humanity. Every day the residents of St. James Park are ignored by people on their way to a date, a meeting , mass, a court hearing, a visit to the bank, you name it, 99% of the people that walk through that park day to day not only overt their eyes, they also walk a longer way round, hold on to their purse tighter or stiffen up. Together the Vinnies students go in groups and sit with the people of St. James Park. They talk with them, they joke with them and they pray with them. They offer them hospitality and in turn they are providing dignity to that person that has been ignored day after day. Not only are the park residents receiving dignity, and their full humanity being acknowledged, but also the students are receiving. The students start to see how they can make a difference. They see how wrong it is to let a fellow human being live without clean underwear, to be kicked out of a park and told to move on (but to where?), have no access to medical care, or to have to beg for food. These students are also shocked to see how easy it is to fall from wealth into poverty. This creates a humble relationship between the student and the resident, and in that moment the resident becomes the teacher and encourages the student to do well, in essence the student is gaining a priceless experience that will resonate in their consciousness for some time. 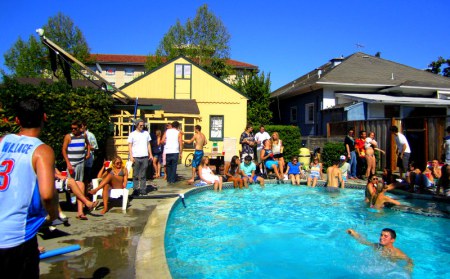 Santa Clara University is known for providing a quality Jesuit education, and offer financial assistance for students in need, although generally, the tuition for an undergraduate student is upwards of $55000 per year. Now, imagine and place yourself in the position of these students, Tuesday nights socials, Wednesday night frat parties, Thursday nights at the local dive bar and so on. Sprinkle in some gym time, shopping, eating and studying and you have yourself a recipe of fun and fine life. So, I ask the question, why would these students who have seemingly got all they need, attend the monthly ‘Knightriders’ (where they go to St. James Park to be with the residents)? Why would they give up time with their friends to attend this? Jenna Bagley (President of SCU Vinnies) responds to this question as to why people attend, “It’s important, I know that [when] I’ve talked to people that have done it, you kind of forget how much of a bubble we live in at Santa Clara, we get caught up in our own lives, we talk to them and form relationships, it is so eye opening and it just makes you keep coming back.” After further questioning I ask why in particular she attends “I enjoy doing it, but more than that, it is a way for me to find God in other people, sometimes, I can see God in other people on the street and see God more readily in them, moreso than people more similar to myself.” Clearly there is a yearning for these students to be with the reality of the world, to not walk around with blinders on but see the impact of what is actually happening in society and try to find God in that place. Every time I have participated in Knightriders with the students they talk about being in the ‘SCU bubble’. It seems that the students want to participate, they want to feel God’s presence where God is most at, with the people in the margins – and they don’t even realise it.

To name this reality, states that it is actually happening. In the Shakespeare play Romeo & Juliet, Romeo asks “What’s in a name? That which we call a rose by any other name would smell as sweet,” not unlike Romeo who’s family had great disdain for the Capulet’s (who should not be named), the crucified people of St. James Park remained nameless. Vinnies has named the poverty that is at our doorstep. Affluent students have created a place where they can gather and be in community and acknowledge the suffering people of San Jose, the residents of St. James Park. Josie Ensor further discusses this disparity in her article:
Santa Clara – the county which encompasses Silicon Valley – has the highest percentage of homeless in America, according to the latest Department of Housing report. Yet it also has the nation’s highest average household income and some of the most expensive homes in the country – all down to the high-tech economy on its doorstep. Silicon Valley is enjoying the most sustained period of wealth creation in history, but the area is crippled by income disparity. Where once a robust middle-class thrived, there exists only the super-rich and the extreme poor.
You could call the residents of St. James Park the Montague’s and the Santa Clara University elite the Capulet’s; however, the great divide is starting to dissipate thanks to Vinnies.

Santa Clara University is an excellent school and is ranked #2 in the West. It feeds students through to fortune 500 companies such as Facebook, Google, Yahoo, Oracle, Cisco, Adobe and the list continues. These students know that they are coming to get a quality education that will lead to a successful career in one of the Top Silicon Valley companies. Not only does it boast great academic results, but also beauty results. Described as the second most beautiful school in the country, the campus and the people the Mercury News reports “The Newsweek survey released Monday listed Santa Clara, the private Jesuit university — home to the historic Santa Clara Mission, palm trees and abundant rose bushes — as the second-most beautiful school in the country. The survey combined scores for the attractiveness of the campus, the weather and the hunkiness/hotness of the student body.” Why would these students partake in something that would take them away from such beauty, like the Knightriders program. The answer may lie in looking at the spirituality of the Jesuits in El Salvador. 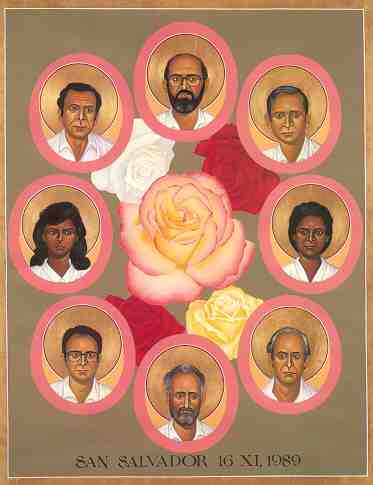 Ellacuría was president of the country’s prestigious Jesuit university, the University of Central America (UCA), as well as chair of its philosophy department and editor of many of its scholarly publications. In his quarter century with the UCA, the last ten years as its president, he had played a principle role in molding it into a university whose full institutional power – that is, through its research, teaching and publications – was directed towards uncovering the causes of poverty and oppression in El Salvador.

He was murdered in 1989 along with six other Jesuits, the housekeeper and her daughter by the US trained squadron of the army of El Salvador. His actions were one that reflected seeing God everywhere, finally, even being murdered for his response to Ignatian Spirituality. His novitiate master Elizondo responds to the Ignatian vocational experience stating that it is a “Trinitarian experience, an experience of [cooperating with] the Trinity present and operative in this world,… realizing its plan for the salvation of the whole world” Lassalle – Klein continues that Elizondo: Insists that the essential Ignatian insight is that the Trinity acts “not only by means of the presence and operation of God, but through the insertion of humanity in history.” This is so because “Christ, the human par excellence, enters into that history of salvation bringing with him all the persons chosen to actively cooperate with the work of the Trinity in realizing the salvific plan of God.” The Vinnies students in their own way are starting the UCA. They are responding to the call of humanity in history. They see the real world struggles of the people of St. James Park. They want to leave their comfort zone and respond to this call. As the President of the SCU Vinnies, Jenna Bagley, mentioned above she and the Vinnies counterparts see God in the eyes of the people at St. James Park.
The Vinnies group counter balance suffering with hope. These are the eyes that are all around and watching, waiting for us to respond. God is opening an invitation and these students, who for all other accounts should be enjoying nights out partying, are responding. This is grace in action. Together they are witnessing the suffering of the crucified people in St. James Park, but they can see hope with their actions. They see smiles on the people they have built a relationship with not only at St. James Park but also with their fellow participants. They are escaping the bubble and searching for reality. They are acknowledging full humanity. They are encouraging others to respond. These students are building a community on a foundation of love, respect and admiration of those in the margins. This would not have been possible without the support of the Santa Clara University.

Thank you for letting me share this special response, I feel honoured that I can share it with you.

Give them to eat.

The Price of Poverty.